We cannot go back to a time where Jews affiliated with synagogues or institutions out of a sense of pure obligation. The larger social and societal structures at play cannot be ignored. Instead, we must start from a place of understanding this new reality. In the marketplace of ideas, good ones will rise to the surface. 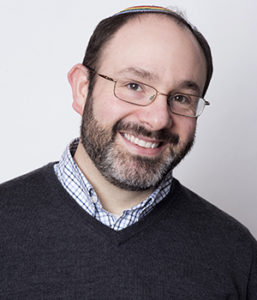 Rabbi James Greene joined the Coalition in 2019 because he was drawn by the powerful relationships that the Coalition’s structure nurtures between its members, and he saw the joy and excitement within this unique community model. In addition to his work here, Rabbi James serves as the Executive Director at Camp Laurelwood in Madison, CT, and is a member of the Board of the Reconstructionist Rabbinical Association. He is a regular contributor to EJewishPhilanthropy and Evolve: Groundbreaking Jewish Conversations, and is also a guest contributor for several local TV stations in Western MA.

Rabbi James Greene grew up in a military family and has lived all over the United States, Israel, and Germany. He studied at the Kansas City Conservatory of Music as a saxophonist for a few years, and completed his undergraduate work in the Jewish Studies program at Florida Atlantic University before moving to Philadelphia to attend the Reconstructionist Rabbinical College. Since his ordination in 2008, Rabbi James has spent most of his time working in Jewish Community Centers. He served as the Program Director at the Addison-Penzak JCC in Los Gatos, CA for several years before moving back to the East Coast in 2015 to join the staff at the Springfield JCC.

Outside of his rabbinic work, Rabbi James is an avid backpacker. He is a volunteer instructor with the Appalachian Mountain Club Youth Opportunities Program, a program that trains youth workers to take their youth into the backcountry. Rabbi James and his family live in Stafford, Connecticut. They own a small homestead and raise chickens and turkeys in addition to their large garden. He and Jen have two daughters, Talyah (11) and Kol (9).

Rabbi James welcomes the opportunity to connect with folks in the community. If you would like to reach him, please email him at rabbijames@gmail.com.